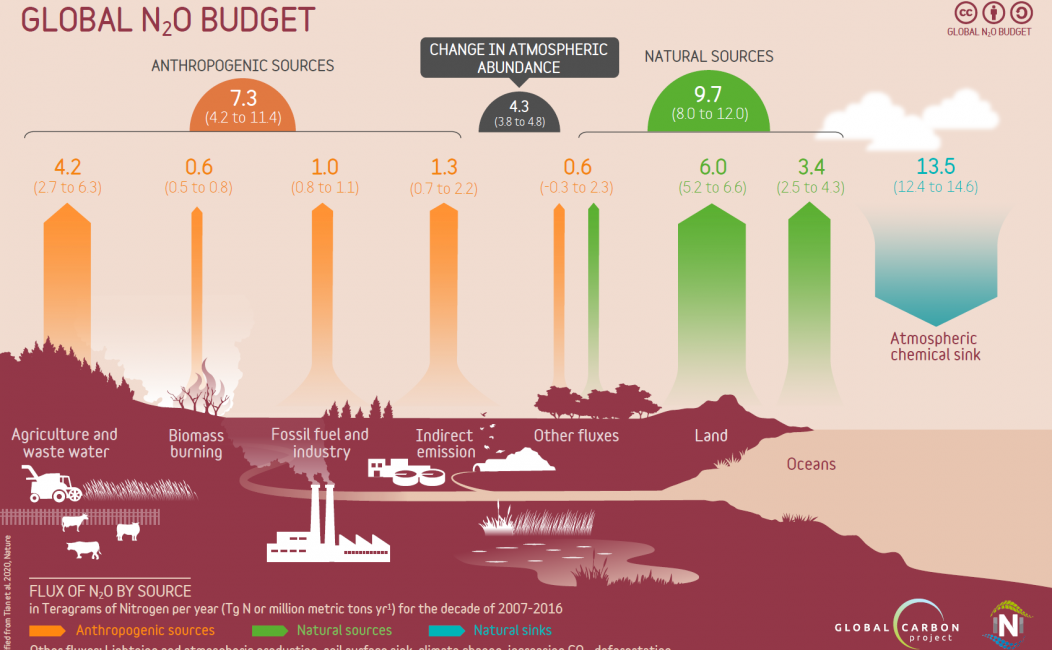 The Global Carbon Project (GCP, Tsukuba office) organized a series of online events (two press briefing and two conferences) to disseminate the results of the recently published Global Nitrous Oxide Budget 2020 in Japan. The press briefing events attracted several representatives from the press and the two public forums attracted a total of 331 registered Japanese and international attendees from diverse sectors, such as industry, media, research institutions and university students.

The event was centered around the Global Nitrous Oxide Budget 2020, a research conducted by an international team of 70 scientists from 44 research organizations around the world under the umbrella of the GCP. The Nature scientific article, published on October 7th, reports on a continued increasing global N2O emission over the past four decades. The increase is primarily driven by human-induced emissions which has risen by 30% over the period. Overall, agricultural activities dominated the growth in the emissions with the use of Nitrogen fertilizers in agriculture including livestock manure production.

The online conference on October 29th brought together three GCP scientists from two Japanese (NIES and JAMSTEC) and one Chinese (Beijing University) organizations to elaborate on the results of the Global Nitrous Oxide budget and engage directly with the discussions. Three researchers and academics from Chiba University, Institute for Agro-Environmental Sciences (NARO), and Research Institute for Humanity and Nature (RIHN) were also invited to join the panel to share their expertise.

The morning Japanese session begins with a presentation by Akihiko Ito (NIES) presenting the findings of the N2O budget report. Followed by presentations by Kentaro Hayashi (NARO) and Prof. Kazuyuki Inubushi (Chiba University) on Nitrogen induced by food production and consumption and Soil perspective – Processes and feasible mitigation. The panel discussion was moderated by Seita Emori, deputy Director of Center for Global Environmental Research (CGER-NIES). The lively discussion and Q&A session was joined by Nobuko Saigusa, Director of CGER-NIES and Fumiko Kasuga, Japan Global Hub Director of Future Earth.